Drive like hell when no one is watching,
Be on your limits and break them when you get bored,
Its not about driving fast or being first, its about making it in one piece…

We are in Salalah for the second time by road. During our first visit, we had no idea about the place and climate, we were just driving here and there. Salalah didn’t disappoint us even if we missed waterfalls and rain since we reached there after the season in 2015. This time we got Eid holidays at the end of the rainy season (called Kareeb season in Arabic). We just reserved hotel for two days and started our journey with out much preparations as we love to travel with out any patterns and long checklists. My car was in good condition since I did the regular service just a week before and the tires were new. No need to say your car has to be in top condition for the road trip, a flat tire or a breakdown could spoil your whole trip. Most of the attractions in Salalah lies in 50km radius from city center. We were not really interested in attractions such as museums, regular beaches and historical places. We covered some of them during our first visit.
We started in the evening from Abu Dhabi, drove full night (~1200km) to reach our hotel in Salalah. The desert will turn into beautiful green mountain in the final 70 kilometers. Check in time for hotels is 3 O clock in this region. The hotel allowed us to check in the morning itself and we had breakfast from the hotel itself. We don’t really like English breakfast, Arabic neither, decided to have food from outside for the following days. We slept till afternoon to we cover up the pending sleep. It was drizzling outside when we woke up. So we decided to go for a drive without any particular destination after the meal. Soon we started driving, the rain run away so we drove to the nearest random waterfall co-ordinates. We search for places starting with “Ayn” (Means fountain or waterfall in Arabic) to find out waterfalls and checkout the photos to make sure something is there at least in photos before we start. Some of them are Ayn Tubrook, Ayn athum, Ayn Khor, Ayn Hamran, Wadi Ayn etc. Google maps won’t always take you to the right place in Salalah if there is no proper road till the end even if the roads are getting better every year. If you feel you are lost please ask someone or follow the crowd like we do, you will end up with something worth. We were heading towards Ayn Athum following the GPS, but we go to Ayn Tubrook first as we got a sign board on the way. Ayn Athum was the most beautiful and versatile waterfall we saw in Salalah. On the way back we go to one of the fruits and vegetables market to have tender coconut.

Day 2
Today we decided to go to Wadi Darbat and Eftalquot area as they were some of the places we like during our last visit. We skip the breakfast from the hotel and headed to a south Indian restaurant somewhere. We spent around 2 hours waiting and having breakfast there as the restaurant was over crowded. We got some friends while having breakfast. We had fun and we got ideas for some crazy places from them. The drive to Wadi Darbat was fantastic with dramatic green mountains on both sides. We can go for a little bit of trekking and pedal boat ride in Wadi Darbat. This time we avoided pedal boat and spent time in a less crowded greenish area near the lake. We reached to this place called Eftalquot area last time by following a random sign board. Its a bit far from the main road and we have to drive off road for around four kilometers. This is a place where mountain meets sea and the view of the sea from the cliff is unimaginable. We came back to the city before getting dark. So we decided to explore another waterfall suggested by those friends met in the restaurant. Google maps took us through really messed up off road track. We parked the car when the path ahead was too bad and started exploring the area on foot. We got company of another 4 cars from Dubai, who also lost their way following google maps. Finally someone told us this is not the road but its close by and we have to walk more than 30 minutes to reach the waterfall. It was almost dark, so we dropped the plan.

Actually we were supposed to go back to Abu Dhabi next day morning. When we talk to one of the travelers, we realised we had one more day left as we saved one day by driving in the night. They started next day morning from Dubai and reached Salalah in the evening. So we run back to the hotel and extended our stay for one more day. We google around  for more places and decided to go to Yemen border. 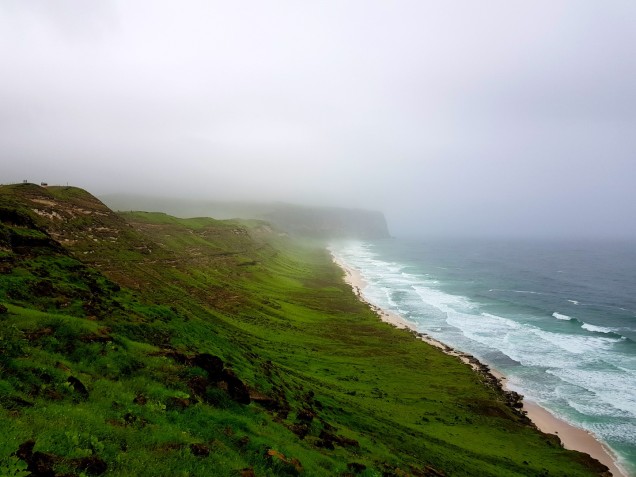 Beyond the dream…. (Eftalquot area)

Day 3
Dalkut is near Yemen border which is 130km from city center. We started by 9 after the breakfast. On the way we pass Al Mughsayl Blowholes, Al Fazayah Beach and Tawi Atair Sinkhole. The visibility was almost 5 meters most of the time so that we cannot drive faster. The road was crazy with a lot of hairpin curves and you can expect anything like a camel/donkey/goat/cow in every turn. So you have to take care of fog, road and animals. We were a little worried were running short on fuel as well and there was no fuel stations all the way till the end. Dakut beach was beautiful. The sky was clear while we were returning. While coming back only we were able to witness the beauty of the place we have covered. Again we are back to the city before getting dark, so we decided to go to the place we couldn’t make last day (Ayn Khor). This time we followed the crowd and reached the place. We can either drive till the waterfall in water (approx. 2 km in watery road) or leave the car before the watery road and walk for an hour. We drove half way in water and stopped our car because the we saw someone stuck in water. We didn’t want to take unnecessary risk and stuck in the water, so we decided to walk to the waterfall. The place was crowded even it was very difficult to reach there. While coming back, we got a lift in a pickup, he dropped us near our car. Even then it was dark when we got out of the watery road.

We headed back to Abu Dhabi in the morning. On the way we were chased by the cops to handover the gift voucher for driving beyond the speed limit. We used to speed a little bit when we got bored and the road is empty (we shouldn’t be), but we were careful always. I had to wash my car on the way before reaching home, it was all muddy and only the number plate was clean as we cleaned it before we start from Salalah to avoid fines. (If number on the number plates is not readable, you might get fined for tampering).
There are some other places we covered last time. Some of the places were too boring to photograph. Water Splashes at Al Mughsayl Blowholes and Marneef Cave were interesting, but the place was too much crowded so we run away from there as soon as possible. Salalah Anti Gravity Point is a place where the car can move at a speed of more than 40 to 60 kilometers per hour without any acceleration (We didn’t had the patience to try it out). Mirbat Beach, Old House of Mirbat, Mirbat Fort Castle were all close by and not really crowded. Al Husn Souk (Al Husn Souq) is a traditional market in Salalah for buying Frankincense, Omani Souvenirs, Scarf and Fragrances.

Both time we drove around 3300km (round trip) , burned around 500 liters of petrol. If we were concerned about the distance, we might have made it 4000km for a round figure. I still remember GPS dude saying somewhere on the way, after 730km take the second exit. My plan for a solo trip to Salalah is still pending as my buddy nailed it two times.

And its the time for the usual question “What NEXT???”

What happened so far